When Lewistown resident Gwen Romak lost her corporate job due to COVID-19 earlier this year, she wasted no time finding a new venture to keep her busy — all thanks to her dog, Finn.

It all started with “The Finn Chronicles: Year One,” a collection of short stories gleaned from social media posts written in Finn’s “voice.” From there, she published “Year Two” of the series and is currently living and working on Year Three.

Finn and the book series have a following that spans across the globe, with fans around the United States and places as far away as Australia.

Romak, who serves as an ethics, compliance and anti-corruption leader in her daily life, recently answered some questions via email about the book series.

Romak: My husband and I live in Lewistown and just adore Frederick County! In my ‘real life,’ I’m a volunteer and passionate advocate for homeless youth, veterans and animals. I sit on the board of SHIP, an amazing nonprofit that strives to lift up Frederick County’s homeless youth so that they can realize their best potential, complete their education, and be poised to break the cycle of poverty. I’ve recently been managing SHIP’s Emergency Shelter Program for people displaced due to COVID and each client’s story is a reminder of how quickly a family can become vulnerable.

In my ‘work life,’ my career has been as an Ethics & Compliance officer, working to curb, investigate and mitigate corruption within corporations and governments. My job was eliminated and I was laid off at the early stages of the pandemic. That was actually what motivated me to work on the books. Job hunting for a very niche role in a global pandemic is difficult and depressing to say the least. Learning how to create the books, publish, market and run the small business has been a wonderful distraction from the daily slog of the job hunt. I’m still job hunting, but when that’s done each day, I work on all the moving pieces required to be an author and market the books. It’s been great learning and so much fun to share laughter with so many of us that need it right now.

GwenRomak’sdog,Finn,thesubjectof‘TheFinnChronicles,’wasorphanedata young age, and his time on the streets left him with some behavior challenges.

Tell me how your book, “The Finn Chronicles: Year One,” came about and what inspired you to write a book in (FINN from C1 )

your dog’s voice. Romak: Finn is about 3.5 years old. He’s a Vizsla – Beagle mix with a vocal and intense personality. We took Finn in as an emergency foster. He was a tough case because he was orphaned so young, and his time on the streets left him with some behavior challenges. We planned to rehab the behavior and send him to a great home. I began posting Finn’s weekly updates (in his voice) in Facebook dog groups as a way to help prospective adopters fall in love with him. He’s got a hundred facial expressions, has epic howling tantrums and was just so hysterically expressive — it was easy to do. He was a handful those first few months; incredibly stubborn and mischievous, referring to us only as ‘the hairy one’ (my husband) and ‘the squishy one’ (me).

He was so bonded to my husband and it took us so long to convince him he wasn’t the boss it became clear that Finn was already home! The posts became so popular in the Vizsla community that everyone insisted I kept going. I just posted his week 134th report. If I don’t get it posted by noon, I get messages from fans asking if they missed it! Fast forward to COVID and losing my corporate job. After dozens of people around the world encouraging me to publish these as a book, I decided to go for it. Book One is his first year of weekly reports with pictures and links to videos. Book Two came out on Oct. 1st with his second year of updates, pictures and videos. I hope to continue as long as he’s still a riot!

Who is the audience for the book (i.e. is it adults, youth, children, a mixture, etc.)? Romak: I wrote it for adults but, to my surprise, it’s been amazingly popular with kids!

I’ve gotten loads of messages from parents telling me their 9-year-old, 12-year-old or even teenager found it hysterical. Apparently, ‘poop jokes’ and Finn constantly making fun of his ‘hoomans’ are a great time for kids. One parent told me they are having family reading night where they read aloud to each other. I love so much that the books are bringing people joy and it’s just icing on the cake that kids can be a part of that.

You said that you have included local references and that you mentioned some small businesses in the book.

Can you share some of these familiar details and explain why you decided to include them?

Romak: The reports are based on what’s really going on in Finn’s life that week. Where he goes, who he meets, etc. One of his most favorite places on earth is K-9 Camp in Frederick. He attends daycare, or as we call it, ‘camp,’ a few days a week to play with his friends. It’s cagefree and well-run, so he has a blast playing and running and we have a blast snooping on their webcams. The owner is wonderful and I honestly think Finn loves him more than us sometimes. Finn also frequents Utica park, Baker Park and spots downtown. He also adores Dr. K and all the techs who fuss over him at Yellow Springs Veterinary Clinic, too. He loves attention and even when they’re giving him a shot or taking his temperature, his tail is wagging and he is licking someone’s face with glee.

You also mentioned that you are planning a “Year Two” installment.

When can we expect to see that?

Since those updates were already written and his 3k Facebook fans were clamoring for the second installment, I hurried it along. We’re still living year three, so that won’t be out until sometime in the summer of 2021. I keep his Facebook, Instagram and YouTube pages updated with his shenanigans and adventures. So, fans can stay connected and get their daily dose of laughter.

Is there anything else you think people should know about “The Finn Chronicles” before they read it? Romak: It’s different than most dog books.

People seem to like the format of weekly reports.

Some read the whole book in one sitting and others tell me they savor it and read one ‘report’ per day. One of his fans in Australia has now read both books twice and still cracks up. He expresses his internal thoughts, which are always sassy and irreverent through hashtags. Sometimes the hashtags reference old movies, characters, corporate office themes, songs, etc. These books make awesome gifts. I’ve lost count of the number of people who’ve ordered pawtographed copies directly from me and come back for more to send as gifts. Because they’re fun for all a ges, light and funny, and void of all the ugly political and other tough stuff we’re living through, they are a neutral and joyous gift.

We all need more light and laughter these days, don’t we? 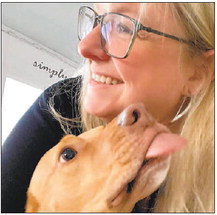 Author Gwen Romak and her dog, Finn, the subject of two “The Finn Chronicles” novels.

Click here to see this page in the eEdition: